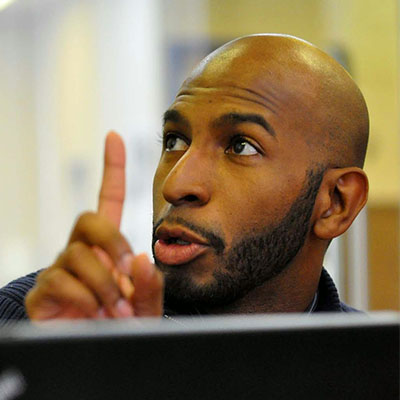 Demond Drummer is an organizer and civic innovator whose grassroots work in Chicago has been recognized by the Obama White House, Code for America and the Aspen Institute. He is currently co-founder and executive director of New Consensus, a leading organization shaping the Green New Deal in the United States.

Demond developed a true belief in organizing while working as a field organizer in the South Carolina primary for Barack Obama’s first presidential campaign. There, he was part of the team that piloted the neighborhood team organizing model that powered an historic victory in the 2008 presidential election.

Demond returned to Chicago to explore the intersection of organizing and digital technology. He worked with LISC Chicago to execute the proof of concept for the Smart Communities Program, which was later awarded $7 million through the American Recovery and Reinvestment Act. Demond went on to launch the Smart Communities Program in Englewood, a neighborhood on the south side of Chicago. Drawing inspiration from Septima Clark’s Citizenship Schools, Demond facilitated digital leadership trainings with block club members, parent leaders in schools and small business owners. His projects included Englewood Codes, which was cited in the Chicago Tech Plan as a model youth STEM program, and LargeLots.org, a community-driven effort that increased by tenfold the number of city-owned vacant lots reclaimed by homeowners.

As part of the inaugural cohort of the University of Chicago Community Programs Accelerator, Demond co-founded CoderSpace, a computer science learning lab where youth develop leadership skills for a changing world. CoderSpace youth have built websites for local businesses, collected and analyzed data from the edge of space and launched high school computer science clubs.

An alumnus of Morehouse College, Demond lives in Chicago with his wife and their daughter.