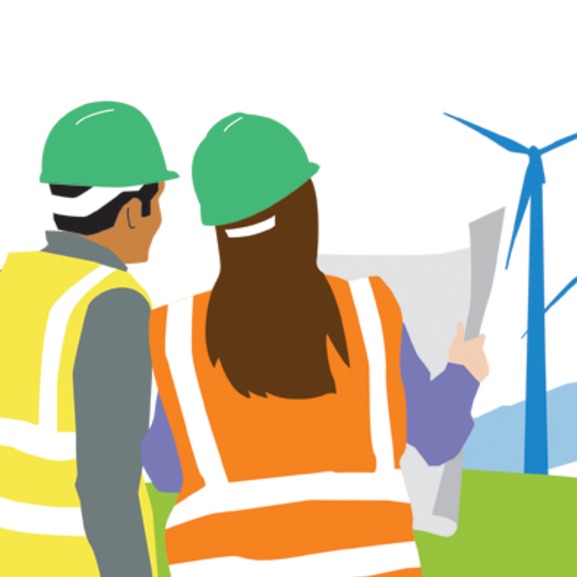 Countries around the world are transitioning their economies to reduce carbon emissions and slow the impact of the climate crisis. In Canada, the federal government is consulting on what should be included in its promised Just Transition Act. The science is clear — and Canadians know the need to transition to a cleaner economy is urgent.

To be successful, the transition must involve workers and communities who will be impacted. All levels of government need to engage with their citizens to ensure that environmental, social, and economic policies will support a more equitable future for all. Canadians need to be well-positioned to benefit from the opportunities that will arise as the world builds a low-carbon economy.

This virtual conference provided an opportunity to learn how other countries are implementing their just transition strategies and hear from community leaders, researchers, and advocates from Alberta and across Canada about the challenges and opportunities for various sectors on the vanguard of this transition. We welcomed all concerned Canadians who want to become engaged in the implementation of a just transition.

The opening session of the conference set the stage for what Canadians need to do to lead the transition to a clean energy future. The panel of speakers explored how all levels of government must engage with impacted communities and workers as they implement policies that will respond to the climate crisis. From large cities to small Indigenous communities, it is time for real action to make the shift to a people-centred clean energy economy.

Catherine Abreu is an internationally recognized, award-winning campaigner whose work centres on building powerful coalitions to advance action on climate change. One of the world’s 100 most influential people in climate policy as named by Apolitical in 2019, she has over 15 years of experience campaigning on environmental issues, including seven years in the heart of the climate movement.

Jyoti Gondek was sworn in as Calgary's 37th mayor and the first woman to be elected to this role on October 25, 2021. Throughout her career, Mayor Gondek has taken a big-picture approach to pressing challenges. Many challenges face Calgarians including the economic recovery, climate crisis, lack of affordable housing, truth and reconciliation, and women’s participation in the labour force. Mayor Gondek believes that solutions to these issues must be bold and rooted in economic, social, and environmental resilience.

Gil McGowan is the president of the Alberta Federation of Labour (AFL), Alberta’s largest union advocacy organization, which represents more than 175,000 workers in the public and private sectors. Gil has been instrumental in putting many important issues forward for public discussion in Alberta. He has led public discussion and policy changes on resource development, climate change and green jobs, reform of the temporary foreign worker program, a $15 minimum wage, pension reform, and reforms to the labour code, employment standards, occupational health and safety, and WCB legislation.

Jason Foster is the director of Parkland Institute at the University of Alberta and an associate professor of Human Resources and Labour Relations at Athabasca University. Before becoming an academic, he worked as a policy analyst for non-profit organizations and spent more than a decade as the director of policy analysis of the Alberta Federation of Labour. Jason is the author of Defying Expectations: The Case of UFCW Local 401 and co-author of Health and Safety in Canadian Workplaces.

Governments around the world are moving forward with the development of policy and actions for just transitions of their economies. In this session, participants learned how other countries are dealing with this process — the challenges they’ve experienced, the solutions they’ve encountered, what worked best. Our distinguished panel of international experts shared their knowledge and experience leading national and international commissions that put people at the centre of climate, social, and economic policy development.

Jim Skea is professor of sustainable energy at Imperial College London, with research interests in energy, climate change, and technological innovation. His current main role is as co-chair of IPCC Working Group III for the 6th assessment cycle. He was research director of the UK Energy Research Centre (2004-12) and director of the Policy Studies Institute (1998-2004). He has operated at the interface between research, policy-making, and business throughout his career. He was a member of the UK Committee on Climate Change from its inception in 2008 until 2018, and is currently the chair of Scotland’s Just Transition Commission.

Sam Smith is the director of the Just Transition Centre, working for a just transition for workers and communities. The Centre was established by the International Trade Union Confederation and partners to help unions and their allies get good plans for just transition at all levels. Previously, Sam was the global climate and energy leader for World Wildlife Fund (WWF), the world's largest conservation organization.
Brian Motherway

Dr. Brian Motherway is Head of the Energy Efficiency Division at the International Energy Agency (IEA), overseeing a range of analytical and outreach programmes supporting energy efficiency globally. In this position, Brian leads the IEA's work with the Global Commission on People-Centred Clean Energy Transitions. Prior to joining the IEA Brian was Chief Executive of the Sustainable Energy Authority of Ireland. Brian holds Bachelors and Masters degrees in engineering and a PhD in sociology.

Dr. Tamara Krawchenko (BA, MPA, PhD) is an assistant professor in the School of Public Administration and a member of the Institute for Integrated Energy Systems at the University of Victoria, Canada. Her research explores the role of the public sector in supporting a just transition to low-carbon economies in Canada and internationally and is particularly focused on transitions in oil-dependent economies and rural regions.

The net-zero transition presents an opportunity to address the systemic inequalities that have historically existed in the traditional energy system. Participants learned about how workers in the fossil fuel industry can transfer their skills to the clean energy economy in this panel that shared considerations for building the net-zero economy in an equitable, affordable, and accessible manner. The discussion focused particularly on two specific groups — women and Indigenous communities — and presented the findings from a Pembina Institute report that examines coal transition programs and shows how the lessons learned from the coal phase-out can inform just transitions in different contexts.

Angele Alook is an assistant professor in the School of Gender, Sexuality, and Women's Studies at York University. She is a proud member of Bigstone Cree Nation in Treaty 8 territory, where she has carried out research on issues of sociology of family and work, resource extraction, school-to-work transitions, Indigenous identity, and seeking the good life (miyo-pimatisiwin) in work-life balance.

Sarah Winstanley is an analyst with Pembina Institute’s Women in Alberta’s Energy Transition project and offers a gender and intersectional lens to other projects. Sarah is a social worker who specializes in community development and engagement and has spent almost a decade working with girls and women leaders in Calgary and across the U.K. Before coming to the Pembina Institute, she led the creation of a range of activism programs for girls at the Women's Centre of Calgary.

Grace Brown is a senior analyst in the Alberta clean energy program for the Pembina Institute. Her work focuses on regulatory reform and utility business model innovation to enable greater integration of renewables and a just energy transition. Prior to joining the Institute, Grace worked in the solar energy industry for over five years and served as a Peace Corps Volunteer for two years in Sichuan, China.

Isabel Altamirano-Jiménez is Binizá (Zapotec) from the Isthmus of Tehuantepec, Mexico. She is Professor of Political Science and Canada Research Chair in Comparative Indigenous Feminist Studies at the University of Alberta, Canada. She has written extensively on energy transition — specifically on wind power and climate mitigation initiatives — and Indigenous peoples.

The Canadian economy — particularly in Alberta — has been strongly connected to the fossil fuel industry for decades, so our transition to a net-zero carbon model is bound to be complex and resisted by powerful corporations and a considerable portion of the public opinion. To understand the challenges and opportunities involved, the energy transition needs to be discussed against the background of the shrinking job market in the Canadian oil and gas industry, which since 2014 has shed 18% of its workforce due to structural changes and increasing automation.

Ian Hussey began his work as a research manager at the University of Alberta’s Parkland Institute in 2014 and earned a career appointment in 2019. He is a steering committee member of the Corporate Mapping Project, a seven-year SSHRC grant project on the oil, gas, and coal industries in Western Canada (2015-2022). Ian has conducted a wide range of research for Parkland, including on corporate restructuring and automation in the oilsands industry, Alberta’s coal phase-out, just transition, climate policy, minimum wage, and Alberta fiscal matters.

Hadrian Mertins-Kirkwood is a senior researcher with the Canadian Centre for Policy Alternatives, a charitable non-partisan public policy think tank. His work focuses on the social and economic dimensions of Canada's shift toward a zero-carbon economy, including the necessity of a just transition for vulnerable workers and communities across the country.

Lori Thorlakson is a professor in the Department of Political Science at the University of Alberta. She holds a PhD from the London School of Economics. With Dr. Melanee Thomas, she is the co-PI of the Future Energy Systems project, Assessing Political Pathways of Energy Transition, which examines decarbonization backlash.

Shannon Daub is the director of the Canadian Centre for Policy Alternatives (CCPA) BC Office, a public policy research institute focused on issues of social, economic, and environmental justice. She co-directs the Corporate Mapping Project, which investigates the power and influence of the fossil fuel industry and is jointly led by the University of Victoria, CCPA, and Parkland Institute.

Workers on the front lines of the energy transition need to lead the discussion about how best to transform Canada’s energy economy. The Canadian union movement has been instrumental in developing the concept of just transition and has considerable experience in its implementation in different sectors of the economy. The panel discussed the key principles and actions planned by the labour movement to support workers and their communities through the transition to a net-zero carbon economy.

Lyle W Daniels is the Building Trades of Alberta’s new community and Indigenous director, a role he will utilize to help young Indigenous people in Alberta begin a rewarding career in the unionized construction trades. Lyle comes from the George Gordon First Nation in Treaty 4 and recently moved to Treaty 6 territory for his new role with BTA. He is the national chair for the National Indigenous Diabetes Association and was recently appointed to co-chair the Equity Working Group with the Canadian Apprenticeship Forum.

Meg Gingrich is the assistant to the national director at the United Steelworkers (USW) Canadian National Office. She also serves as president of Blue Green Canada. Meg got her start in the labour movement working on a successful organizing drive at a Nordia call center in Montreal, where she worked in 2006. She then went on to study at Stockholm University in Sweden, where she wrote her master’s thesis on unions and environmental action.

Ken Bondy is a National Representative for Unifor, the largest private sector union in Canada, with more than 315,000 members working in every sector of the Canadian economy. Originally working out of the Ford Motor Company Engine and Casting plants in Ontario, he has represented workers in various capacities for 34 years.